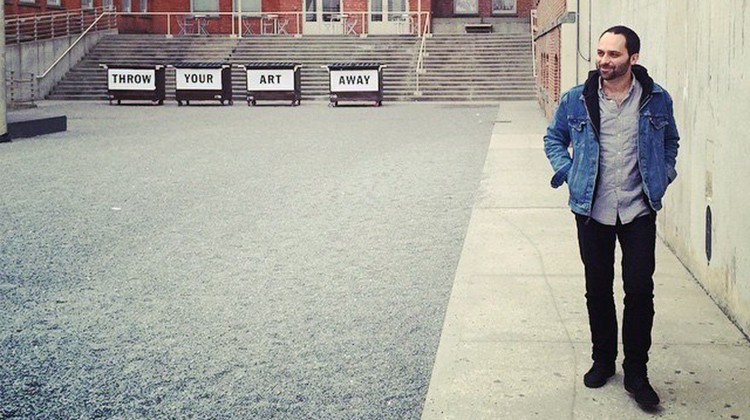 Screen Slate is the ultimate guide to what films are screening and streaming these days. They curate daily listings of arthouse/repertory cinema and gallery shows happening IRL and online, as well as publish original essays, cultural criticism, features, and interviews.

This past August Screen Slate hosted their 10 year anniversary at The Roxy Cinema, and they’re coming back to do a Halloween takeover.

We sat down with founder and editor in chief Jon Dieringer to talk all things Screen Slate.

What is your background in film?

I originally started working in production. I did my undergrad at the University of Pittsburgh, and around the time of my graduation the city made a big push to accommodate film production, so all these shows came into town and it was really easy to find work.

I started out as an accounting clerk, and then took a job as the assistant to producers Ted Hope and Anne Carey on the film Adventureland. I ended up going to Los Angeles for a bit, and then came to New York.

What are the origins of Screen Slate?

After I moved to New York, I was getting fed up with working on studio films with long hours and uptight people who were burning out trying to produce garbage. I had this romantic idea of getting involved in “truly” independent film but had no idea where to start; at one point I was part of this little production accounting crew that was going to work on the first Avengers and I was just like, fuck this.

So, I was just trying to skate by on unemployment and see a lot of movies and basically was like, why isn’t there a list of everything?

It was very frustrating that The Village Voice was in evident decline, and stuff like Time Out New York was obviously incomplete. It was also really obvious, although I didn’t yet know where to find it, that there was an experimental film scene here, and I wondered why it wasn’t covered more. So, basically I found some artist assistant work and then was like pirating Lynda.com tutorials about how to build a website and just started doing it.

Initially, I wanted it to be a really direct, minimal listing of films and gallery exhibitions, but I also started writing short little summaries of everything happening that day, and then it just grew through word-of-mouth. I didn’t know anyone in this kind of film scene, and I didn’t really make any effort to publicize it, but I started to meet people through other organizations like Spectacle Theater, the Flaherty Seminar, and Anthology Film Archives.

It’s basically just fun to meet people and feel like I’m working on something that they appreciate. It’s helped me connect with other folks with common interests, and then we can find things to work on.

Most of the writing is still done by longtime close friends and people who I met through other film stuff, like volunteering at Spectacle Theater.

I think the Roxy is a great example of finding people to collaborate with! We started talking and were like, what can we do that would be fun.

I’ve also always admired stuff that seems like it exists because it’s a cool thing to do, so it’s fun to run something like that that’s lasted so long and that people seem into.

How do you come up with the merch collaborations?

Technically the first merch collaboration we ever did was with Robert Beatty, who is probably best known for his album artwork for Oneohtrix Point Never and Tame Impala. I met him through C. Spencer Yeh and Takeshi Murata.

Beatty designed a tote bag that we made during a Kickstarter campaign in 2015. And then we also started doing publications illustrated and designed by people who also write for Screen Slate like Anny Oberlink, who runs Topos in Ridgewood, and Stephanie Monohan.

The new era of merch is basically all due to Bráulio Amado, who is an incredibly talented artist and rad person. I approached him out of the blue about redesigning our site during the pandemic, and since then we are basically sending ideas back and forth all the time. I’ll be like, “What if we made a t-shirt with this funny picture of Fassbinder?” and he’s like “What if we did it as shorts and also made condoms to go with them?” Or he’s like, “I don’t know if you were serious about making a Sliding Doors t-shirt, but what do you think of these illustrations of Gwyneth Paltrow?”

Bráulio has also been really proactive about roping other designers into stuff, which is how the shirts by Steak Mtn. (the project name of Christopher Norris), came about—which was awesome, because I knew he was a reader and had always wanted to reach out. One day I mentioned something about “Mann Boy” referring to Michael Mann fans and my girlfriend Hanna Edizel was like, “I’m going to design Mann Boy in Thief-style brush lettering and we can print it on a shirt for people to crop the sleeves off of.”

That’s basically it—just trying to make stuff that’s fun and also helps us cover the costs of running the site and trying to compensate people for the work they put into it.

Screen Slate seems to be the holy grail of film in New York City with a very a loyal following, how did you build that?

That is super kind! I think Screen Slate fulfilled an important need to corral film listings as alt weeklies like Village Voice were in decline. Beyond that is a factor of consistency. I never planned for it to have a daily email, but when I was running it off WordPress in the early years, people figured out you could automatically get each new post with the listings as a daily email. So it’s part of people’s mornings.

The other thing is that all the writers have very strong voices, and I think our readers enjoy following them and building a personal connection to them. I also think that what we decide to feature has a “curatorial voice,” which is something that’s developed collectively from the tastes of everyone involved in it.

Obviously people are looking for an alternative to Hollywood, and legacy publications, and IndieWire and the Tomatometer and stuff, but I think beyond being an alternative. We give readers the sense of being people who are out and about and enjoying all this stuff happening in New York City and eager to bring them in on it.

How do you find the writers you work with? Tell me more about the zines you publish?

The longest-running contributor is Patrick Dahl, who I’ve known since we were in Boy Scouts together in Ohio. We struck up a friendship because our lockers were alphabetically placed near each other, and he was wearing a Night of the Living Dead t-shirt. After that my friends Cosmo Bjorkenheim and Vanessa McDonnell, both of whom I knew from Spectacle, got involved, and then it just kind of snowballed. It’s an open process, although it’s tough to respond to people and honestly I live in fear that I unintentionally overlooked an email from a genius writer who now hates me for ignoring them.

The publications came out of the Kickstarter, at which point we published an anthology of five years of Screen Slate. From there we do them whenever we can, usually around film series that we program. The most popular at this point is probably the Jackass one—we did a 35mm series of films shot on Mini DV, and I wanted to do this whole thing about film-video hybridization, and the excitement and anxiety of what digital filmmaking meant for the future, and so on. But everyone just wanted to write about the Jackass movie.

Most recently we did one of internet-themed movies that were all released in 1995, and that’s also been really popular. I sent a bunch to hackers in Slovenia.

What is your favorite part about repertory film and why did you decide to devote a following to only that?

I wanted to basically look at classic film, experimental film, media art, and contemporary truly independent cinema as part of a shared history. I felt like the work I was doing on essentially Hollywood films was really exploitative and didn’t believe in it. So in a way it was about connecting with what I loved about cinema and why I wanted to work in it in the first place.

What are your favorite programs and pieces that you’ve run on Screen Slate?

This is kind of a cop-out or maybe a little pretentious, but I see the writing on Screen Slate as part of a running dialog. I like that we can jump from featuring something like no-budget, shot-on-video Ohio horror film Trashcans of Terror at Spectacle one day, and a gallery exhibition the next, with all kinds of things in between.

In terms of programs, I’m really proud of The Medium is the Massacre at Anthology, which paired media-themed horror films with experimental films and video art.

I also think the 1995 series was cool because the programming approach was collaborative, and we also made it so that Johnny Mnemonic, a movie about a pandemic in the year 2021, and Strange Days, about documenting racist police violence, were the last repertory film a lot of people saw in New York before everything shut down, which was fucking weird.

How do you become a member of Screen Slate? What does the membership entail? How much is it?

People can sign up on Patreon, and it starts at $3/mo. We have some standard incentives like discounts from people like Criterion, Posteritati, and of course our own store. The pandemic shook up a lot of things but we’re always improvising new stuff and getting back into a new groove.

To sign up for Screen Slate and get more information head here.