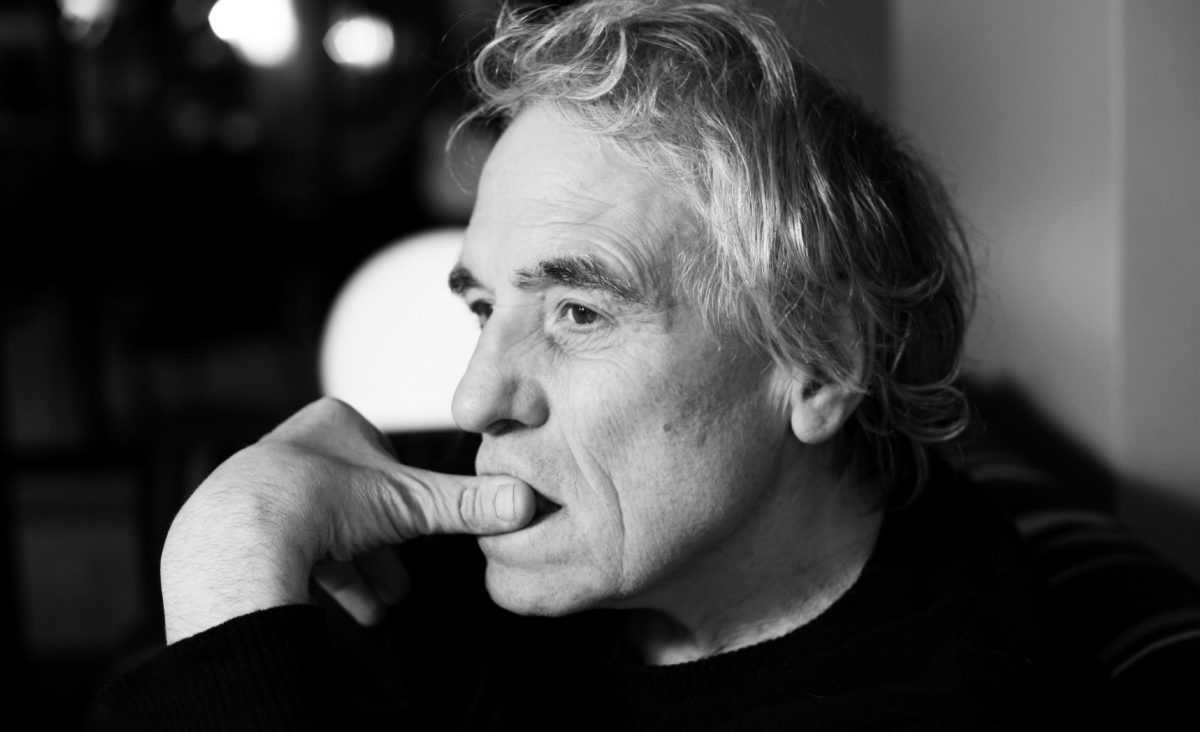 In Conversation with Abel Ferrara

The mention of Abel Ferrara’s name is usually met with one of two reactions. The first reaction is a blank stare given only by those not familiar with the cult director and the second is—and this applies to both positive and negative reactions—open-mouthed, enthusiastic, passionate. Those familiar with the director have strong opinions; his most well-known films are lawless and provocative, dealing in darkness and controversy.

In 2013, I had the pleasure of working in the wardrobe department of Ferrara’s Welcome to New York. As someone who prefers a roll-with-the-punches kind of environment, the energy of his set was possibly ideal for me. On one particular day, we were shooting at JFK airport and the crew lined up to be let into the terminal. Abel had forgotten his ID and resourceful as ever, he pulled up his IMDb page for proof of existence.

I never saw whether the security guards knew who Abel was. But, especially as New Yorkers, they certainly should. That IMDb page features some of the greatest independent New York films: Ms. 45, Bad Lieutenant, The Driller Killer, King of New York, etc. Born and raised in the city, he is a product of his environment: his films are often synonymous with New York.

Today, Abel lives and works in Rome. True to form, he continues to take inspiration from his surroundings, shooting often in his own neighborhood. His most recent film is a documentary, Piazza Vittorio. An immersive look at Rome’s largest public square, the film explores immigration, humanity and really feels like a study on finding a way to live. The film will be showing at both the Venice Film Festival and the New York Film Festival. I sat down with Abel to discuss the project.

What brought you to Rome?

In the 90s, a lot of the financing for our films was coming from here. I’m Italian-American—and 15 years ago, I started coming here… and not only to raise money but to shoot here. We shot a film called Mary here. Then we shot Go Go Tales living in New York and living here half the time—kind of like Willem (Dafoe) is. Then we came to shoot Pasolini. I met Christina, ya know… We got married, had the baby and now I’m here.

Do you prefer your life in Rome to the one that you had in New York?

Well, in New York I kind of burned out in a lot of ways—you know what I’m saying?

Do you find it’s easier financially in Europe?

Yes and no. For us, it was more France than here. Italy is kind of economically depressed; this is part of the documentary. Obviously these guys had a better chance eight or ten years ago when they came here, same as I. At this point, I’m an immigrant too. Eight years ago, it was a lot easier to raise money for films; now it’s tough, it’s different and living in Italy… I don’t know what number it is on the list of 150 countries but it’s way beyond the United States in terms of capital. But in terms of the kind of films I want to make, I don’t know if I could really make them (in America) you know.

You used Kickstarter for your next film (the upcoming Siberia), right? What was your experience?

We used it just to see what it was. So many people say, “It’s this, it’s that”. For me, you don’t know what anything is until you experience it yourself. I mean my experience with it is: for Siberia, it’s not the way to go. We’re financing that film in a more conventional way. But the theory of it, the idea of it… I mean, I think it could be very, very viable—ya know? For the right project.

Is that because it’s a more conventional project?

Well, it’s not a conventional project; that’s why we need conventional financing. I know; it’s complicated. Kickstarter is for maybe a more conventional project. You need the kind of project that is Internet-savvy… There are certain things that work on the Internet. Some kid on a skateboard rapping in fucking Long Beach, CA has 49 million hits, okay? Maybe some superstar Hollywood guy has 12. Do you dig what I mean? The Internet is its own world with its own language, its own conventions and its own deal. So if you want to finance using it, you have to have something that matches.

As technology has advanced and the Internet has played a more important role in the world, the film industry has changed. Do you feel like your career would be different if you had started out now as a filmmaker?

It’s impossible (to answer that); you can’t change history. When I grew up, just getting equipment was a miracle. Now, half of the movie was shot like this (holds up his iPhone). I shot it like that or a guy standing next to me shot it like that. What you’re feeling is something that happened in a moment and—bam—right there. As opposed to: “Where are we going to get the equipment? Where are we going to get the film? When are we going to borrow the sound thing? When is it going to be developed? When can we see it? Oh, three weeks after we shoot it… Oh, we can only shoot two seconds because we can only afford…” You know?

They ask why Scorsese—when he says action—he says “ac-tion” (quickly) because when every second in every foot of film he had to pay for, he didn’t want to waste it saying “ac-tiooon” (very slowly). They went to the Prague Film School and if action was more than 9 frames, students were punished by not allowing them to use the equipment for a month. So everybody (quickly) says “ac-tion”. Now, I could turn this on (motioning to his phone) and you and I could talk for three hours for a 2-minute interview. You’re doing it (a film) for somebody to see and hear it and share your emotions and the equipment isn’t going to change that.

Would you ever consider making a narrative film with an iPhone? Making a documentary is something different…

We do it all the time, man. You know we can do it; it’s no problem. The camera and the sound on this is total theatre quality.

Do you find the process of making a documentary film more enjoyable than a narrative?

To me, it’s all the same. This is why I keep doing it because I feel the interaction between a filmmaker and the actor. You know, you saw some of those people we were shooting? How do you get a performance like that? How do you fake something that strong? I mean, that’s really what we’re about anyway; trying to get people to be like that.

You want people to be themselves.

Well, you know, you’re going for a certain kind of realism but once you take the camera out, you can throw realism out the window.

People are too conscious of themselves.

Did you enjoy interviewing people? Was anyone resistant?

No, I mean, you saw it. Was anybody resistant? We didn’t even ask questions.

There was a guy who walked away from you.

Well, he wanted to get paid; it was that kind of thing. But he still gave a big interview. You didn’t hear a lot of questions being asked, did you?

No, it was mostly people talking; you prompted them.

Here, it’s a different thing because you’re doing an interview and I’m experienced. But these people, man, you say hi and they burst out into total political, didactic-

They’re grateful for the opportunity to talk.

Yeah! They all got some big fucking complex agenda to express to you—which I love and which is mind-blowing and so different. This guy you think is just sitting in the fucking park? He’s got a whole fucking movie and his own philosophy; all he needs is for you to… ya know?

I liked that you included your wife and your daughter so much in the film; it gave the film a feeling of community and neighborhood. It felt more personal.

Well, the mother—Christina—is Russian and the baby has an American passport but she was born in Rome so she’s the ultimate immigrant… The future of Rome is the baby. Mother from there, father from the US—and she’s being raised here. And then (in the film), Christina’s mother told a beautiful story about having to leave Christina as a child in Moldavia and make a living in Rome. Christina lived 5-6 years—she lived a long time without her mother but her mother was supporting her and her sister. It was a touching story, right?

It was very touching; I actually teared up.

When did you film the documentary?

Well—after that everything happened with the travel ban…

Listen, Rome is 3000 years old. Things don’t change overnight. This is a developing thing. It’s the same neighborhood. But the travel ban is in the United States…

It is but I didn’t know if you’d been thinking about that—since you’re from America, I wondered if it played in your mind at all what’s been happening politically.

Well, it’s a big deal here because the thing is with immigration, man… It’s the same thing as immigration with the Mexican deal. These are war refugees in a big way. In America, it’s the drug war in Mexico that is generated by the drug addiction of the United States—or the world, ya dig? It’s not like when my grandfather came to the United States. He wanted to come! He made a conscious decision: “I’m coming”, okay? And there was a job waiting for him even though they didn’t know he was coming. When he got off the boat, he didn’t go sit in Central Park for six months. They were working with picks and shovels. They were building a country, you know? So they needed all these guys.

These dudes are escaping everyone when they start talking politics and they’re all saying the same thing. I mean, come on—you know that the genocide is going on in Africa. It’s happening in Romania and it’s happening in Syria… So, these guys aren’t like, “Oh, let’s go to Rome, Italy and be pizza-makers”. These guys are escaping with their lives. Even the guy in the beginning says, “You know, we sit in the park like this and one day the army comes and puts a gun in our hands and the next day the Taliban comes. And you got a choice. And if you don’t make that choice it’s not like, ‘Oh, I’m going to sit in the park’. You don’t make that choice; that’s not a choice. You either fight for them or you fight for them.”

Well, I suppose everyone’s just trying to find a way to live.

Or find a home.

Yeah, you’re trying to alleviate the suffering… You’re trying to find some kind of tranquility. And I mean everybody. So when, in our country, they start with this turning immigration into a tool of political ambition… I don’t know about that.