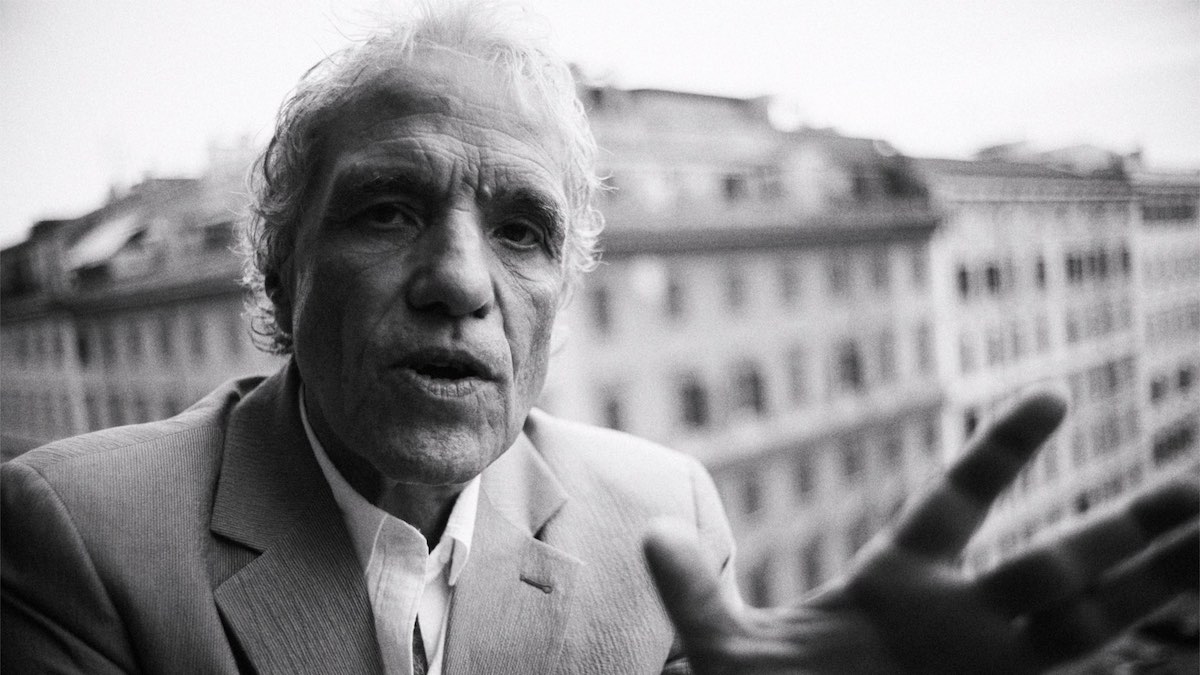 Even in Italy’s ‘Piazza Vittorio’, Abel Ferrara is Still the King

Abel Ferrara, the 66-year-old provocateur behind cutthroat classics The Driller Killer, Bad Lieutenant, and over 30 other feature films, dropped by The Roxy Cinema at the end of October for a special screening of Piazza Vittorio, his as-yet-unreleased feature documentary on the Roman city square of the same name. Any Ferrara project is sure to attract old-school No Wave heads and freaky cinema kids alike, and from Kelly Cutrone to Amos Poe to yours truly, this edition of the Artist Series was no exception.

Piazza Vittorio, which made its North American debut earlier this year at the New York Film Festival, combines archival footage of Rome’s multicultural center with Ferrara’s trademark in-your-face interviews. Not only does the public square reach all the way back in time to the third century, with a wife and infant son, today it’s a place Ferrara calls home. In 2014, while shooting the biopic, Pasolini, he met Christina, the woman who would become his wife. “[We] fell in love, we had the baby, and I’m there,” he said, matter-of-factly. “It was one of these things: I met a chick, knocked her up, and now I’m stuck there.”

The crowd laughed, of course, wrapped up in the master storyteller’s web. But for all of Ferrara’s humor, his other reasons for expatriating weren’t so funny: “I think 9/11 was kind of the falling-off point for us in terms of shooting movies in New York,” he explained. “That was a moment where the city really came together—and it was the future of a beautiful place. [And then] somehow we sold out to bigtime high-finance hedge fund hucksters, you know?” On top of that, he was also in the throes of a bitter addiction, so a return to roots became a resolution. “I’m Italian-American, […] so when I managed to get sober, I really had to connect.” In a rehab center outside of Naples, “very close” to where his grandfather was born, “This one guy had this great place where I was able to get away, get off the merry-go-round, and get sober.”

In his unmistakable, scratchy drawl, he said, “It was… very cool.”

The film itself doesn’t pull any punches—it’s an honest portrait of a multicultural crossroads, where buskers fleeing African war zones collide with Italians who can trace their lineage at least as far back as the days of Valerian. And amidst it all is a scheletro crew led by Ferrara, himself technically an illegal immigrant. “[Connecting] was different with every person,” the director said of his subjects. “Some of the stuff, I’m not even there. We hit the street and it’s like, now you go talk to him, you go talk to him… Some people don’t want to talk to you, some people are talking bullshit, [and some] people just break into this incredible rap, ya dig? You don’t even have to ask questions, you just point a camera, and everyone is not who you think they are.”

Although the project was only on a personal deadline and a budget was scarce, he did offer this inside info: “Some people you pay, some people you don’t have to pay—you know the joke. ‘Charge $100 to do the interview, and $200 to shut ‘em up.’” But the film is also sumptuous in a way that only locals with a history of street cinema—not to mention a few millennials’ experience depicting the human form—can capture. Of the skill level of his crew, he explained, “You want to make a guerrilla film, you need guerrillas—not monkeys.”

Following the screening of Piazza Vittorio was a rare performance by Abel himself alongside the Joe Delia Band and special guest MC, Schoolly D. Few were there to see Ferrara for the music, though, something he understands fondly. “[In the 60s] we had a band. We we’re like 16 years old and my uncle had a club in Bridgeport, Connecticut, where he booked acts. […] So we auditioned for my uncle, right? And I’ll never forget. My guy was sitting by a Cadillac saying, ‘C’mon we’re gonna get this gig.’ I go over there thinking we’re gonna play on Thursday, gonna play on Friday, and my uncle looks at me and says, ‘You guys wanna make money in the music business? Sell your instruments.’”

But when it comes to filmmaking, Ferrara’s not the kind of guy who fools around. Italy may have his heart now, but he gave the audience something to look forward to: his next film. “We’re shooting a movie now about a projectionist, a guy who owned Cinema Village when it was around back in the day,” he explained. He may feel like a proper paisano, but, as Cinema Manager Illyse Singer put it, he’ll always be the real king of New York.