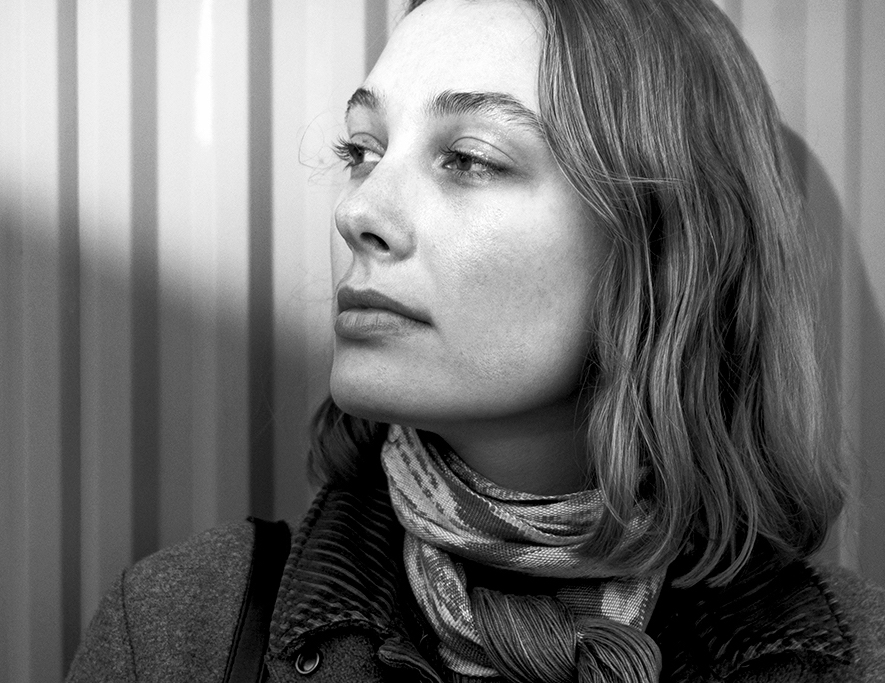 In Conversation with Filmmaker Hazel McKibbin

Hazel McKibbin is a British-American writer and director based in Brooklyn. Hazel is a 2020 BAFTA Newcomer and is currently working on her thesis at Columbia University where she is pursuing an MFA in Screenwriting and Directing. She finds herself drawn towards realism, often through a feminist lens, and the idea that compelling stories can be created from ordinary relationships and interactions. Her most recent project and directorial debut Doublespeak has not gone unnoticed; it was featured on Short of the Week, has been a Vimeo Staff Pick Best of the Month and will have its festival premiere at Sundance 202. Here, Illyse Singer of the Roxy Cinema talks to Hazel McKibbin about her latest project, getting into Sundance and making films in New York City.

What was it like finding out your film was accepted into Sundance? Well it’s weird, everyone keeps telling me, “Wow, must be so strange.” It’s my first film, it’s my first festival. I haven’t even been to Sundance ever and this will be the first festival the film has screened at. The film was shot pre-pandemic, but we didn’t finish post until June 2020 so there were never any screenings.

Do you feel like getting into Sundance has led to other opportunities? Totally, it’s one of the benefits of the zoom life. I’ve been meeting with tons of people out in LA who would be harder to connect with normally because I don’t live there. There’s definitely been a lot of opportunities for me to meet and interact with people I wouldn’t have had the chance to before. I’m hoping this leads to making my feature, which is where I’m trying to head. It does still feel like connections are coming out of it in an easier way.

What has your experience been screening in a digital space? How has that changed your original intentions? The weirdest thing is I’ve never seen the film on a screen larger than my laptop, I haven’t even been up to Columbia since the Pandemic began. The film was released on Short of the Week in July and then became a Vimeo Staff Pick before going to Sundance, so the distribution has been somewhat backwards. My first instinct was to release it digitally and not do festivals, because it is my first year film and I had no expectations other than I wanted people to be able to watch it and hopefully like it.

You grew up between London and New York, I’m curious as to how growing up between these two cities shaped your role as a storyteller, and does the city play into how you write stories? How is it to make films in New York? Yes, definitely. Most of my films are set in and around New York City because I lived in NY until I was 15 and then I moved back after college. I tend to write what I know. New York has been the center of my world, so it becomes the center of the film landscape I create. I can’t imagine making them anywhere else. They just live so specifically here. Doublespeak was about the office I worked at in SoHo. You can’t escape New York, you’re having an emotional moment on the street and people next door are partying. It’s the same thing with making a film, you’re shooting and people are coming up to us and asking “What is this?” It’s a microcosm.

How is your experience at Colombia for your MFA? When I applied to film school I knew I wasn’t going to leave New York, so I applied to Columbia and NYU. Columbia is big on the story and the writing aspect. My undergrad degree was english literature, so it definitely feels like it’s the right place for me. I’ve had an amazing experience there. My classmates and professors are so supportive. My classmates read my scripts and gives very honest feedback. I love the program and feel very indebted to it.

What is it like to shoot in a pandemic? Shooting in a pandemic hasn’t been too different for me because so far, I’ve only had small crews on short films. A small crew lends itself to shorts. The circumstances under which we shoot are different now, but it’s not a limit to the stories that I want to make which tend to be small. There are no big car chase scenes.

What are some of your favorite New York filmmakers, films, and artists? So many. Kids (Larry Clark) of course, that’s a classic. I really tend to reference photographers for my films. I love Nan Goldin, who is such a New York artist. I love the Safdie Brothers. Heaven Knows What is such a specific New York story that I really enjoy.

It seems like you’re more interested in an adolescent perspective of New York City? Yeah a bit. I think maybe because I left here when I was 15 and missed that late adolescence in the city. I’ve alway been drawn to those missing years and filling in the gaps. Of course, as I write so much from the way I experience the world, the perspective tends to be that of a young woman. I wonder how different my life would be if I had spent those years here.

How important is it to you to tell a story from a female perspective? I’m generally interested in women and female driven stories with smaller less overtly active protagonists and drama. I enjoy more ordinary relationships and interactions. Doublespeak is the start of that, but I’m exploring other kinds of gender dynamics and that’s what my next short and feature will be about.