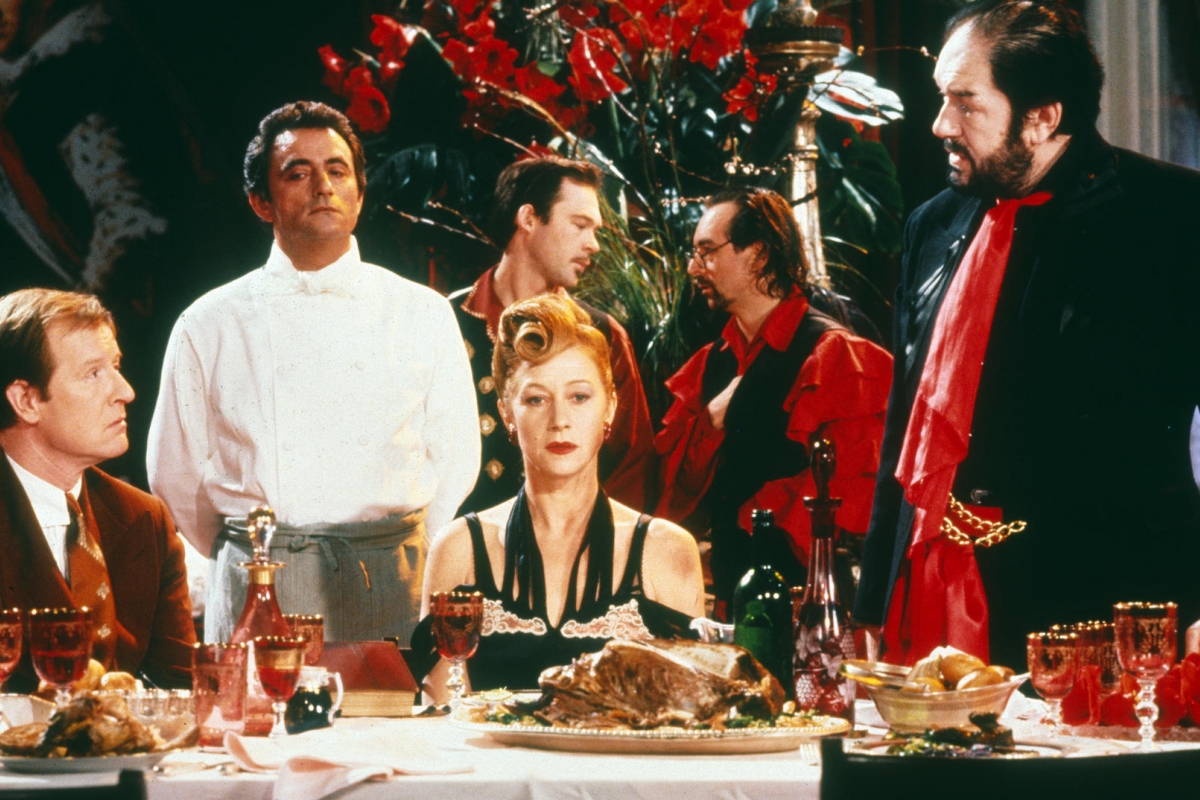 A LAST REPAST FOR THE DECADENT SPRING: THE COOK, THE THIEF, HIS WIFE, AND HER LOVER

Decadence is a word wherein opposing definitions coalesce. Death and decline merge with visions of elegance, opulence, and haute cuisine. The Roxy Cinema’s Decadent Spring series draws to a close with Peter Greenaway’s The Cook, the Thief, His Wife and Her Lover – a film which earned notoriety for its crafting within the extremes of grandeur and depravity.

Greenaway sets his film in a luxurious London restaurant resplendent with prodigious Flemish murals and the guests exorbitantly dressed. The establishment is lorded over by the gangster Albert Spica (Michael Gambon), whose crass jokes and violent tantrums erupt in abrasive contrast. His boorish temperament escalates with his drinking as he bullies his henchmen and restaurant’s chef (Richard Bohringer) to the pleasure of his whims. His wife Georgina (Helen Mirren) is the only elegant fixture in Spica’s retinue, abiding her husband’s crudeness with the pleasures of her wardrobe and refined palate. A humble bookseller (Alan Howard) in a drab brown suit sits reading at his table when he catches Georgina’s eye, and soon the pair are maneuvering nightly trysts in hidden portals of the restaurant to escape Albert’s wrath.

The film is sumptuous in its stylization, the scenery reveals itself from room to room as though each were a different dimension. The scarlet dining hall swings its barn doors into a sprawling black industrial kitchen where the cook and his staff toil over steaming copper pots in mint green. Georgina’s red gown and cowboy-fringed gloves even shift their color to white when she enters the pristine tiled ladies room. Jean Paul Gaultier’s costumes adorn these transgressions time and space with couture combinations ranging from the Elizabethan to the sadomasochistic. And Michael Nyman’s score, both haunting and austere, heralds the danger of each succeeding night.

The Cook, the Thief caused an immediate stir for its candid displays of sex and its unforgiving violence. Its dramatic juxtapositions of extravagance, squalor, love, and butchery are what makes the film so powerful in its effect. Peter Greenaway, whose prior films had artistic glamor contained within a cerebral aloofness, unleashes his political rage through an allegory whereby all power is held by the criminal and the violent. Through ignorance, greed, and ruthlessness they wreak havoc on their domain – battering the feminine, suppressing the intellectual, and abusing the laborer.

The Cook, the Thief, His Wife and Her Lover is a confrontational portrait of society, culture, and integrity crumbling under the triumph of corruption. It is mesmerizing in its beauty even when we hope to avert our eyes.