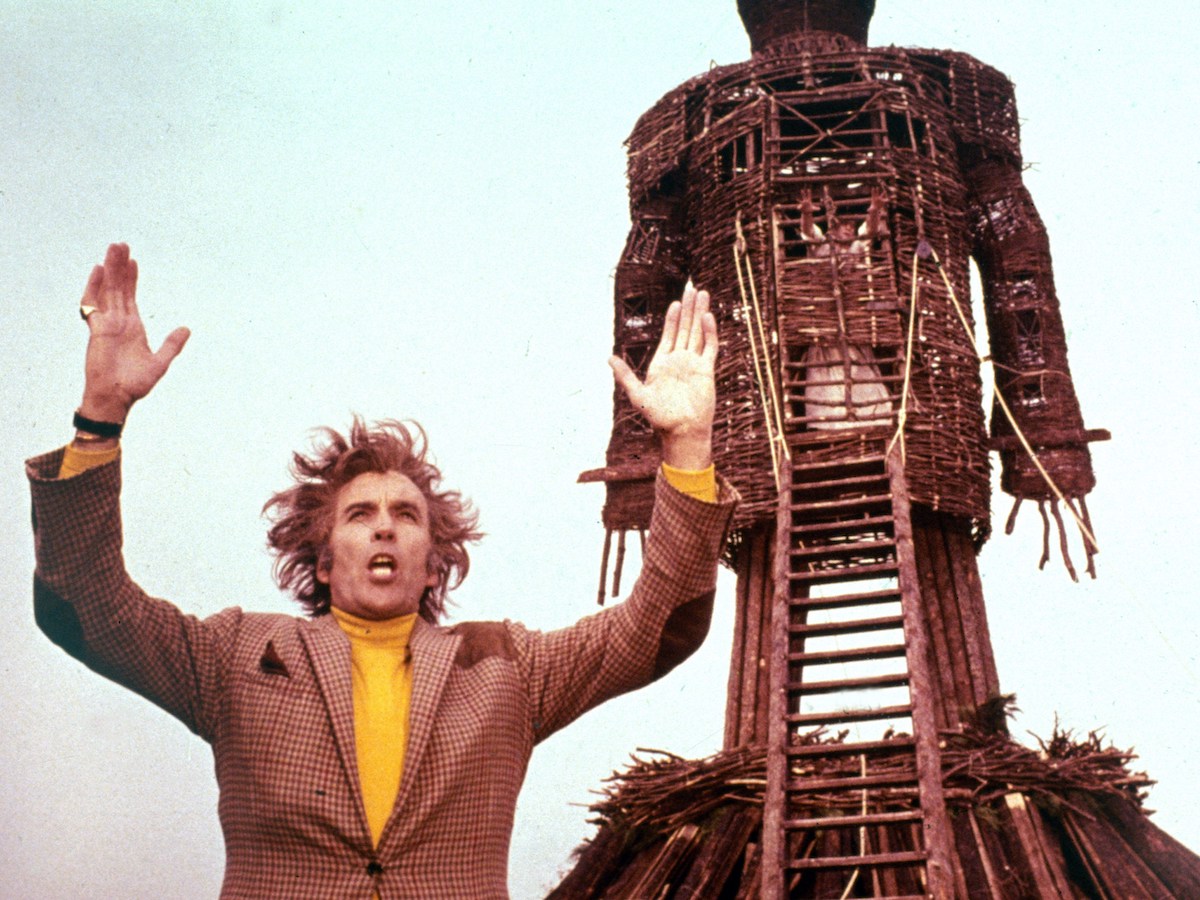 The Mystery of Mysteries: Secrets Behind Some of Horror's Most Cryptic Films

Occult conspiracy forms the basis of three of the foremost horror classics featured in The Roxy Cinema’s October lineup. The isolation of victims beset by beguiling enemies rouses the mind’s latent persecution complexes. Unseen forces from hidden dimensions ignite the spiritual anxiety essential in every supernatural thriller. But these films are distinguished by the artistry with which these devices are maneuvered, and the mysterious conditions surrounding production can be just as essential to their atmosphere. Sometimes the drama off camera is as fraught as the film’s paranoid tension. The secret philosophies encrypted within its frames are more esoteric than the plot’s occult overtones. And the erotic liaisons woven between cast and crew are as seductive as the on-screen pagan promiscuity.

It’s precisely this ambiguity that makes Rosemary’s Baby unprecedented in its evocation of horror.  It induces fear through the subtle, wholesome, and the commonplace. There is neither gore nor special effects, and yet the gentlest of exteriors conceal sinister intent.

The Upper West Side’s Dakota was selected for the foreboding edifice in which newlyweds Rosemary Woodhouse (Mia Farrow) and her husband Guy (John Cassavetes) are drawn into a paranoid labyrinth of deceit and devil worship.

The villains however appear anodyne and scatterbrained, cast from drawings director Roman Polanski had sketched with the production team to imagine the building’s Satanic cult as a coterie of classic Hollywood actors. These sketches were matched with veteran actors such as Sidney Blackmer, Ralph Bellamy, Hope Summers and Patsy Kelly in the casting process. Ruth Gordon’s bravura performance as Minnie Castevet – kitschy, distracted high priestess of the cult – won her both an Oscar and a Golden Globe for Best Supporting Actress.

Tony Curtis provides the voice on the phone as a joke intended to baffle Farrow as Rosemary sleuths to uncover Guy’s ties with the cult. And Anton LaVey,  founder of San Francisco’s Church of Satan,  served as advisor on the film to give its ritual sequences their tawdry veracity.

Anxiety and tension ran feverishly high in production as well, as the film was nearly terminated before completion. Over budget and behind schedule, Farrow insisted she be cut from her contract under complaints from her husband Frank Sinatra, who served her with divorce papers on set after she was persuaded to continue filming. The studio was growing impatient with Polanski who was making his American directorial debut. Polanski persevered, and Rosemary’s Baby is widely regarded as one of the greatest films of the horror genre.  Catch screenings in 35mm print on Saturday 10/28 at 4:00pm and 8:00pm.

The film was a favorite of Stanley Kubrick, whose fastidiously detailed adaptation of Stephen King’s The Shining is so laden with mystery as to have engendered volumes of interpretations of its content, some of them blatantly outlandish. While its supernatural presences collude in their bloodlust, the plotline itself yields a host of conspiracies hatched from film theorists.

Just as the Dakota transformed into an isolated fortress of black magic amid the teeming streets of New York in Rosemary’s Baby, architecture serves as the medium through which evil infects the minds of its denizens in The Shining. Jack Nicholson stars as Jack Torrance, aspiring writer hired as a caretaker of a secluded off-season ski resort with his wife Wendy (Shelly Duvall) and their clairvoyant son Danny. Jack eschews warnings from the hotel proprietor that the isolation compelled the last caretaker to butcher his wife and children. Danny’s gift reveals visions of rivers of blood engulfing the hotel halls and eerie presences luring him to come and play. Wendy is distressed by Jack’s spectral deterioration into a violent psychosis. The only explicit clue Kubrick offers to the source of this dark power is that it somehow issues from the hotel itself.

A plausible interpretation links its origins to an American Indian curse, in a condemnation by Kubrick of the injustices of American colonialism. The screenplay maintains that the hotel is built on a native burial ground, a detail not found in King’s original novel. American Indian motifs adorn much of the set design, particularly a stack of Calumet baking soda cans stacked in the kitchen during a pivotal scene disclosing the nature of “shining” – possessing or emitting a psychic link to hidden realities.

A thesis slightly more far-fetched asserts that Kubrick concealed information within the film as an admission to have aided the American government in staging the Apollo Moon Landing. Kubrick had ties to NASA who provided him special film stock for Barry Lyndon, whereby he was able to shoot using exclusively natural light even in night scenes with only moonlight or candles. Conspiracy theories abounded over the moon landing hoax, and Danny’s Apollo spacecraft embroidered sweater combined with cracking of the film’s numerical themes excited aspiring debunkers.

A swarm of other theories circulate proposing references to skewed sexuality, CIA mind control, and the Illuminati. But even without taking any giant leaps, the film is engrossing in its bizarre nuance and undecipherable imagery – stunning in 35mm print screening Saturday 10/21 at 6pm and Sunday 10/22 at 8:15.

The Wicker Man (1973) may lack cinematic prestige in the highest circles of academia and high-budget Hollywood, but its legendary cult status through the decades has enchanted hordes of devoted followers around its peculiar power. The cast is rich with performance by some of British cinema’s most intriguing personalities from the psychedelic era, and heavy with on-set love triangles that compliment the film’s irreverent sexuality.

The story rhythmically reveals a hidden plot directed upon a pious Scottish police officer Sgt. Howie, played by Edward Woodard after David Hemmings and Michael York both declined the role. He is drawn to the remote island of Summerisle by an anonymous letter claiming the disappearance of a teenage girl, Rowan Morrison. His Christian sensibilities are shaken by the islanders’ devotion to antiquated rites of Celtic paganism, and he begins to suspect the Rowan has fallen victim to ritual sacrifice. Howie is enticed and appalled by the island’s strong female presence: Diane Cilento as the sorceress schoolteacher, Ingrid Pitt as the “nymphomaniac librarian,” and Britt Eckland in the role of the island’s buxom love goddess, Willow MacGregor. Willow’s father the barkeep Alder MacGregor is played by chorographer and mime-artist Lindsay Kemp – famous for his dance mentorship of David Bowie and Kate Bush.  Lord Summerisle, master of the island, is played formidably by Christopher Lee.

The screenplay was written by Anthony Schaffer (Sleuth, Death on The Nile), twin brother of playwright Peter Shaffer (Equus, Amadeus), and was practically the only directorial credit for Robin Hardy. Cilento was married to Sean Connery before the filming of The Wicker Man where she sparked an affair with Schaffer whom she would later marry. Ingrid Pitt was the lover of the film’s producer Peter Snell at the time, who wanted her for the role of Willow and mistreated Britt Eckland notoriously during production; dubbing her voice over and employing body doubles during Willow’s famous nude dancing scene. Eckland  had once been the wife of Peter Sellers, was imminently the mistress of Rod Stewart, and was pregnant with the child of record producer Lou Adler during the shooting of the film.

The soundtrack forms a major component of the narrative, composed by Paul Giovanni with inflections of psychedelic folk combined beautifully with British Isles traditional hymns.  It’s songs have been covered by numerous rock bands over the years and formed a major influence over the neo-folk genre in England in the 1980’s and 90’s, as well as the revival of the psychedelic folk genre which peaked in 2004.

The Wicker Man’s inconclusive treatment of both morality and spirituality are deeply philosophical and augmented by its potent charms. Film Magazine Cinefantastique called it “The Citizen Kane of horror films,” and Total Film rated it as the 6th greatest British film of all time.  It was highly censored and reconfigured for its initial theatrical release but some of its finest scenes have been recovered and re-mastered, bringing the into ideal form with a new “Definitive Final Cut” screening Friday 10/27 at 10:30pm.