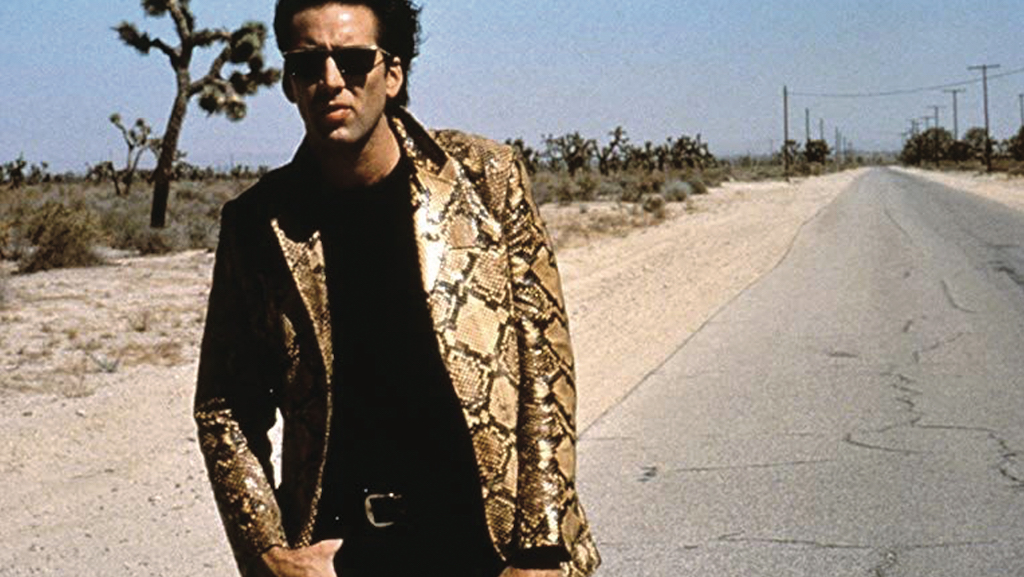 “I love New York, so I’m happy to be at The Roxy,” began American actor and cinematic legend Nicolas Cage on Wednesday night March 3rd 2020, to open his post-screening Q+A. As a crowd, we were first treated to a rare, 35mm, X-rated cut of David Lynch’s 1990 cult classic, Wild at Heart. Then we got 30 minutes of the man himself.

“It’s been a long time since I’ve seen it,” Cage admitted following the film. “I’m very happy with the way the movie holds up. It’s a little like going down memory lane, and I have memories of Laura [Dern] and Willem [Dafoe], and definitely David, who was instrumental in a lot of ways in terms of my work moving forward.” Moments like this were par for the course that evening, as Cage generously invited the packed house into his world of magic, myth-making, and memories. He even did impressions. “I asked him once on the set, I said, ‘David, is it okay if I have fun while making this movie?’” Cage put on a convincingly nasal Lynch accent. “‘Nickster, let me tell you something, buddy: it’s not only okay, it’s necessary!’ He would say things like, ‘Solid gold, Nickster, that was solid gold!’” If the crowd’s response was any indication, Lynch’s advice—that it was okay to have fun—made its mark on Cage, in art and in life.

Although Cage claimed to no longer be able to sing Elvis, like his Wild at Heart character Sailor Ripley does in the film, blaming it on “singing ‘Purple Rain’ incorrectly in too many karaoke bars,” he did tell us about some other singing that didn’t make it into the film. “The most bizarre choice David asked me to do was, he said, ‘Uh, Nickster, we’re gonna have two cotton balls, and I want you to sing an opera about cotton balls.’ And right on the spot I had to make up this opera song with Laura right there. And I mean, it didn’t make it into the movie, but that was the kind of bizarre direction that I would get.” He also offered a few surprises: “A lot of people thought it was my fascination with Elvis, but it really was more, believe it or not, my fascination with Warhol,” that inspired his choices in playing the role. As Cage told it, an interest in “art-synchronicity” suggested to him that “what you can do in one art form, you can do in another.” Warhol’s use of collage led to Cage’s idea that his Sailor Ripley character could be a collage of Elvis. “I thought, why can’t we do that in film performance? … Amazingly, Lynch in the rehearsal process said, ‘Yeah, I love it Nick, let’s go for it.’” Add to that a snakeskin jacket Cage bought at an LA thrift shop called Aardvark’s, and the rest is cinema history.

A pioneer in his own right, Cage wasn’t shy about the cinema that influenced him. “I didn’t discover really great acting until I was 15 and I went to see James Dean in East of Eden and Marlon Brando in On the Waterfront, in a theater in LA called New Beverly Cinema. I knew then and there that’s really what I had to do.” Nor the art: “I love [Irish poet William Butler] Yeats. [I’ve] talked about The Secret Rose. [Avant-garde composer Karlheinz] Stockhausen was an interesting avant-garde inspiration for me because I never heard anything like that. My dad was playing ‘Punkte’ and ‘Stimmung’ as a child, and I was like, what the hell are we listening to? This is giving me nightmares, but then it stayed with me.”

The influence of his father, a former Dean of Creative Arts at San Francisco State University, was immediately apparent. “He was always immersed in art and film,” Cage remembered, “and we had a little projector at home—I think I must have been five—and he was screening movies like Nosferatu, and The Cabinet of Doctor Caligari… For a five-year-old to be watching that stuff, that abstract, surrealistic [Max] Schreck body language, it gave me nightmares, but they were beautiful nightmares. They stayed with me.”

His excitement was palpable, his enthusiasm infectious. He talked about Stanislavsky (“Stanislavsky said the worst thing an actor can do is imitate someone. So of course I wanted to see if I could break that rule,”) and his aunt, Talia Shire (“who was the one that first told me, ‘Naturalism is a style. You can try other things. You can try surrealism. You can experiment,’”) and even his famous relative Francis Ford Coppola (“Having that guy as your uncle, I mean, he’s a pretty phenomenal guy,”). He even treated us to acting tips, suggesting that, “One of the best ways to improve as an actor is to read poetry out loud so you get comfortable with the sound of your own voice, so it doesn’t upset you, and you get comfortable with the words, and the poetry,” and explained the philosophy behind his particular acting style, “Nouveau Shamanic”: “In pre-Christian times in the village, there would be the village shaman, and he or she would go into flights of the imagination to try to bring answers to help whatever the condition or issues were within the village. Movies do that. In film performance, the actor or actress goes into flights of the imagination to reflect what is happening in society.”

The conversation was both a testament to Cage’s continued dedication to his craft, and an inspiring reminder that the greatest tool, as an artist, is passion—even if it means eating cockroaches, like he did on the set of 1988’s Vampire’s Kiss—twice. “[Director Robert] Bierman and I, we were kinda knocking heads a little bit, and they actually sent cockroach wranglers out into different basements around New York City, and they found not one but two—because he got it in the first take, but then he said he wanted to just watch me do it again. … It was the worst thing I ever did. It was absolutely horrifying. And it was soft.” The audience gave a choir of groans. But was it worth it? “I don’t have any complaints or regrets. I mean, all those memories and experiences have brought me here, in the power of now, to be able to talk with you at The Roxy Cinema. So I’m blessed. I love you.” We love you too, Nic.