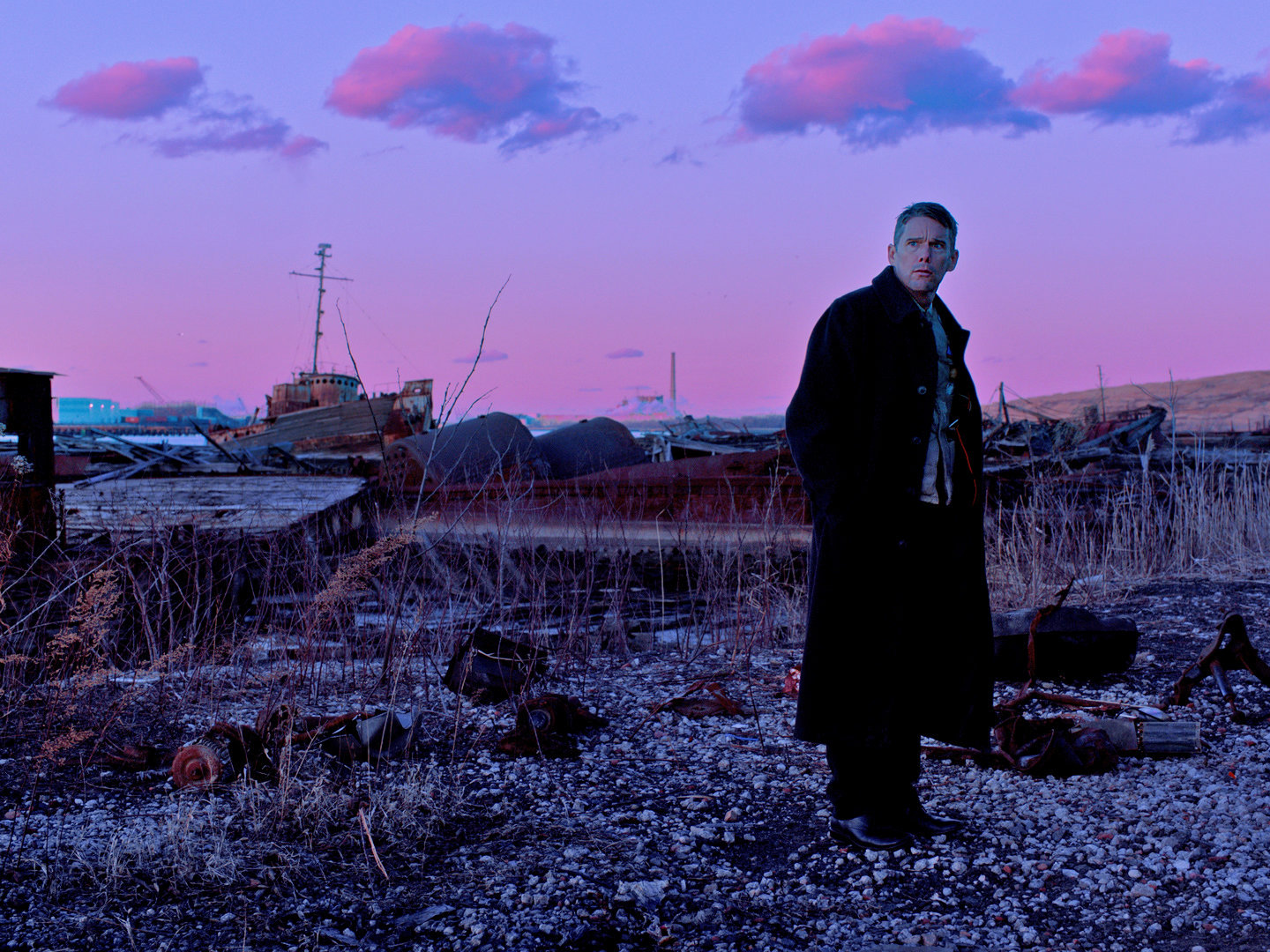 The night Paul Schrader gave a Q+A at the Roxy, the cinema felt like all the air had been sucked out of it. Outside it was a cool summer Thursday night. Inside we were collecting the bits of ourselves splattered about the crushed red velvet walls and deep down into the cracks between the seats following the explosive ending of his new film, First Reformed. “They say that the average human being throws out as much heat as a hundred-watt bulb,” the revered writer-director kicked things off, looking out at his befuddled, bewildered, and overall thoroughly mind-fucked audience. “So now we’re looking at a lot of heat!”

The film, the 18th written and directed by Schrader, quickly gets us acquainted with the noble Reverend Toller (Ethan Hawke), a man of the cloth beset by a despair he considers to be of Biblical proportions. And it may indeed be; when the environmentalist husband (Philip Ettinger) of a parishioner (Amanda Seyfried) commits suicide over the prospect of bringing a child onto an irreparably damaged planet, he leaves behind a pack of plastic explosives and a suicide vest. Is it a sign from on high? As we dive headlong into Toller’s abyss, the question lingers on long after the film’s rapturous final act.

The film, apparently, was a long time coming for the 70-year-old from Grand Rapids, Michigan. “Before I started screenplays, I was a film critic and a seminarian, and I had written a book on theological aesthetics and spiritual cinema,” Schrader recounted. “And then, as events transpired, I ended up making films. But I never wanted to touch spiritual cinema, and people would try to connect the films I had made with the book I had written. I said, ‘No no no, that’s not me. I’m never gonna go there—you’re never gonna catch me skating on that Bressonian ice.” It was a meeting with Pawel Pawilkowski, the Academy Award-winning Polish director of the nun-in-crisis masterwork, Ida, and a discussion about the new economics of the film industry that allowed for a risky movie like it, that sent Schrader back to his roots. “I left that dinner and I walked uptown to Chelsea and I said to myself, Okay, it’s time. You’re going to be 70 next year. It’s time to write that script you swore you would never write: It’s time to write a spiritual script.”

For a decision he made “not with an emotional commitment, with an intellectual one,” he set himself to work in the most intellectual way possible: “It was just a matter of saying [to myself] Okay, I’m gonna do it now: What are all the films that I respect of this ilk? Watch them all again, and figure out where you fit into this scheme.” A veteran storyteller, Schrader made no bones about revealing the films he, at times, took more than inspiration from. Elements of Bresson’s The Diary of a Country Priest, Bergman’s Winter Light, Dreyer’s Ordet, Tarkovsky’s The Mirror, and even Pawilkowski’s Ida fit curiously into Reverend Toller’s ever-Schraderian moral crisis.

One filmgoer I spoke to felt like, at times, First Reformed “bordered on plagiarism.” But to this reviewer, it felt like Schrader was explaining the way a mathematician reaches a new conclusion based on his forbearers’ proofs, in filmic terms: “I knew at the end of this film I had to jump into the non-material world, into the magical world, into that world that is so close to us that we can almost touch it, but never can,” he said, reducing that absolute hardest-to-describe phenomenon into plain English. “How can I foreshadow that? How can I tell [the audience] that there is a non-material world coexisting with this one? And that’s when I literally said to myself, What would Tarkovsky do? And I said, Well, Tarkovsky would have them levitate.” Without diluting what is one of the film’s most transcendent moments with my own hideously insufficient language, what I will say is: they levitate. Boy, do they levitate.

Of course, things take a darker turn for the pathological priest, and as the mood of the tone of the film descends with him, what Schrader found is that his latest film shared quite a lot in common with his first. “When I was in the editing room, the editor turned to me and said, ‘You know there’s a lot of Taxi Driver in this film?’ I said, ‘Yeah, I know there’s some, because I put it in there,’” the audience erupted in laughter. “He said, ‘No, there’s not some, there’s a lot’—what had happened was, I was using these intellectual arts cinema models, but I was gluing them together with the obsession that, 40 years ago, caused me to write Taxi Driver.” It was something of a revelation for man who wrote what many consider to be New York’s greatest movie. “I had not really planned or anticipated that. I thought [First Reformed] was gonna be much much slower than it is, but once I got in the trenches, I kept reverting to what I knew best, which is how I had begun my career, which is Taxi Driver, the first script I wrote.”

The discussion that followed transformed into something of a masterclass for an audience eager to learn. Schrader covered everything from how and why he got “ur-hippie jokester” Ethan Hawke to give a recessive performance—“the opposite of what an actor is normally trained to do, which is to embrace the audience’s love of his entertaining abilities”—to manipulating an audience—“the more the audience is uneasy, the more they are discomforted but mesmerized, the more willing they are to take a leap forward into a place they haven’t been to”—to how his choice of using the 4:3 aspect ratio in First Reformed changed in the formal structure of the film.
“I don’t think anyone in this audience turned to the person next to them and said, ‘Oh my god, there aren’t any [over-the-shoulder shots] in this film!’” he explained. “But somebody beside you said, ‘There’s something not quite right here. There’s part of the film language that isn’t being used. That creates unease […] and it’s out of this unease that you can start to work your evil magic.”

Maybe evil magic is the only antidote to evil times in which, he explained, “we are playing out a doomed scenario.” But, the veteran storyteller did offer one thing up to the angst First Reformed made to a visibly shaken audience infectious:

“The answer is courage. You need the courage to hold hope and despair simultaneously. We now live in a time where there is relatively little reason for hope. The question becomes, do you just give up? Or do you hope because hope itself makes life livable? As Albert Camus said, ‘I don’t believe, I choose to believe.’ So, should we now say ‘I don’t hope, I choose to hope?’ And that’s what Toller says: ‘We must choose to hope in the face of all evidence otherwise, because life is not tenable if we don’t make that choice.’”

As to whether or not Toller makes that choice for himself… Let’s just say, at the very least, First Reformed requires a second viewing.