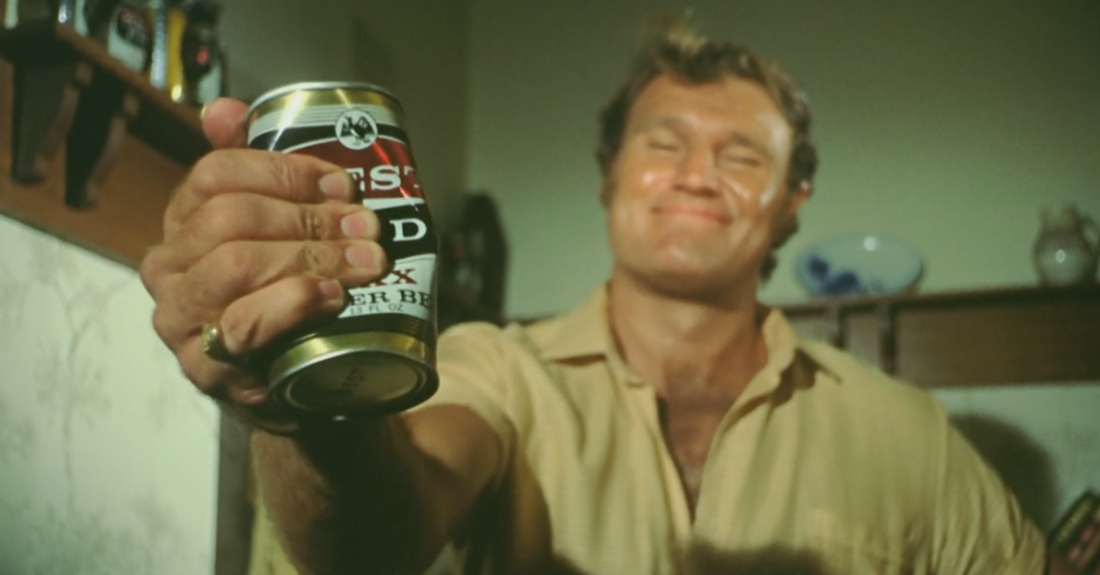 “Nick Cave said it was the most terrifying film ever made about Australia,” explained Castel. Accompanied by Uniform vocalist Michael Berdan (Uniform is Berdan and ex-The Men multi-instrumentalist Ben Greenberg), the three launched into a post-film discussion for the latest installment in the Roxy’s Artist Series.

“As far as our last LP goes, we took the title from the film Wake in Fright,” said Berdan. “A good chunk of the songs had something to do with insomnia, which is something I’ve dealt with for my whole life. During a good course of the writing, I was getting two or three hours of sleep and just waking up in utter horror,” just like the film’s main character, a middle school teacher stuck on holiday in a malevolent mining town.

The three films largely took place during the day—including most of the mass shootings visualized in Uniform’s music video—increasing the growing sense of paranoia 24 frames-per-second-fold. The story behind the making of Twelve Dark Noons feels a lot like a horror film. Borne of the idea to shoot a music video for Sacred Bones labelblokes, Naked on the Vague, “We actually had these Wake in Fright-style experiences,” Castel explained.

“We ended up stuck in the outback,” laughed Braaten.

Castel reminisced: “We ended up at this weird ‘Homebush Hotel,’ that was totally abandoned and empty. The guy at the bar had rifles behind it and wanted us to stay there.”

Not only did he try and pressure them into what Braaten describes as “rooms for rent that were tin shacks—maybe 6’ x 6’—that locked from the outside,” locals asked the Sacred Bones crew to join a ‘roo hunt, which happens to be a majorly brutal turning point in Wake in Fright. It sees the film’s protagonist going kangaroo killing with a pair of howling drunk hillbillies and a doctor (played to tooth and nail by Donald Pleasance). For this scene, Kotcheff used actual footage taken while on a legal night hunt with licensed professionals. (According to Screen Prism, the Weekend at Bernies and First Blood director was encouraged to capture the slaughter by the Australian Royal Society for the Prevention of Cruelty to Animals, who sought to have the practice outlawed. They failed.)

A box office flop for its way-too-fucking-realness, it took decades to restore and re-release the film. Right down to the curse that begins Kenneth Cook’s titular novel—“‘May you dream of the Devil and wake in fright’”—Berdan, who grew up in a Pennsylvania area now in the throes of the opioid epidemic, summed it up best: “[In the film and today] you have this segment who thinks they know everything and what they ignore or look down on eventually comes back to bite them. Their sanctimony gets the best of them, and the next thing you know, Donald Trump’s president.” Each day we awaken terrified, yet the diabolical dream never ends.
Words by Emerson Rosenthal