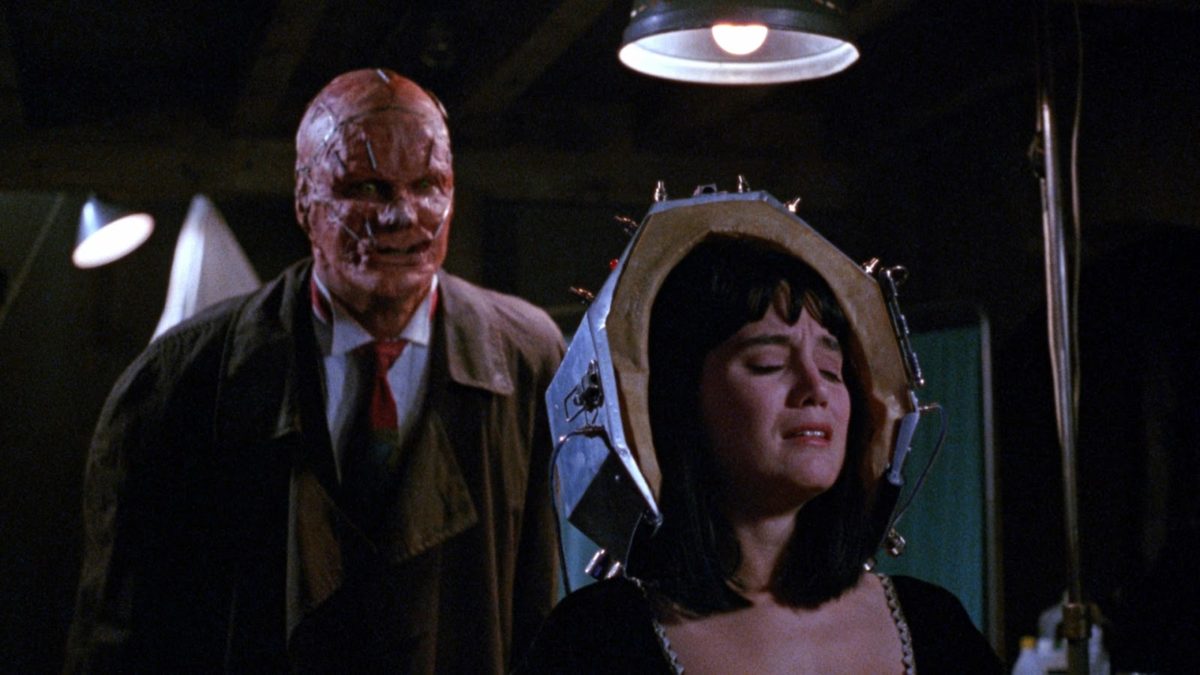 Scream Slate: A Halloween Take Over by Screen Slate

On Halloween weekend Screen Slate takes over Roxy Cinema to present a series of horror double features. While each pair of films is spiritually linked in one way or another, all six are all drop-dead bangers shown on the 35-chill-imeter format, except for Def By Temptation, which shows in a new Gore-K restoration at the bequest of its distributor.

Screen Slate members get a discount at the box office and free popcorn.

An in-name-only remake of the 1953 Vincent Price film that in fact owes a massive, unacknowledged debt to Tourist Trap (1979), House of Wax is easily one of the most purely entertaining studio horror films of the 2000s. Elisha Cuthbert leads a cast of twentysomethings-as-teens mostly plucked from The WB shows who end up in a ghost town after their cars break down. They soon discover that the site is in fact a massive wax museum—and the sculptures may not be entirely made of paraffin. Director Jaume Collet-Serra creates a genuinely eerie atmosphere of terror and suspense around R-rated gore, and the gooey set piece at the film’s climax is rife with indelible imagery. But House of Wax is also known as the quintessential film appearance of Paris Hilton, who was then at the peak of her fame. Despite the cringey allusions to her sex tape, she holds her own in one of the more memorable roles of the era.

House of Wax screens alongside I Know Who Killed Me, starring Lindsay Lohan, whose tabloid-fuelled feud with Hilton is an essential part of 2000s lore.

In this torture porn-inflected psychological thriller, Lindsay Lohan plays Aubrey, a multitalented high schooler from a stable home who, after being kidnapped and tortured, loses her memory and returns as Dakota, a teenage stripper who claims to be a different person. Is Dakota really someone else—and if so, who, really? Or is Aubrey going through a PTSD-related dissociative episode? After years as a Disney darling, Lohan had achieved mainstream success with Mean Girls and began to establish serious acting cred in Robert Altman’s A Prairie Home Companion. I Know Who Killed Me was filmed as her well-publicized struggles with substance abuse made her widely considered unemployable, and the movie was a major critical and commercial flop. Despite the glaring flaws and admittedly compelling trainwreck and camp factors, modern audiences have also found it to be a genuinely thrilling example of a film that dares to be stylish, oblique, and extremely weird, like a sleazy update of Italian gialli plopped into the 2007 summer blockbuster season. Screen Slate’s Cosmo Bjorkenheim saw it as a parable for the fractured national consciousness in the wake of Bush administration torture allegations, which makes way more sense than it probably should. In further light of reevaluation of the way young women stars were mistreated and publicly vilified at the time, I Know Who Killed Me is a fascinating lens through which to revisit the 2000s.

I Know Who Killed Me screens alongside House of Wax, starring Paris Hilton, whose tabloid-fuelled feud with Lohan is an essential part of 2000s lore.

Fans of David Lynch will lose their minds (and eyeballs) over this undeservedly obscure, offbeat thriller by the late Bigas Luna. A Russian Doll narrative structure spirals around a serial killing ophthalmologist (Michael Lerner) who collects eyeballs under the hypnotic influence of his overbearing mother (Zelda Rubenstein of Poltergeist). Yet when the fourth wall suddenly ruptures, the setting shifts to a movie theater screening the apparent film-within-a-film, where a young patron is convinced that the man sitting near her may be a murderer—and then things get really weird. Rife with paranoia and hallucinatory narrative criss-crossing, the film suggests an unlikely mix of Buster Keaton, Marcel Duchamp, Salvador Dalí, and Lamberto Bava. Few, if any, films are so conceptually premised upon their being seen in an actual theater. The ability of Anguish to make its audience genuinely paranoid is unparalleled, giving each screening the feel of a one-of-a-kind additional layer to the film’s surreal structure. Any chance to catch it with an audience in 35mm is can’t-miss. Just make sure you know who’s sitting behind you.

Screen Slate previously included Anguish in its series “The Medium is the Massacre” at Anthology Film Archives. This screening is scheduled back-to-back with 1991’s movie theater slasher Popcorn.

In this underrated slasher, a killer stalks a group of film students hosting an all-night horror movie marathon at their local theater. Popcorn blends modern practical gore effects with a reverence for old-school scares; like Joe Dante’s Matinee (1993), it’s full of films-within-the-film featuring William Castle-esque gimmicks like Shock-o-Scope, Odorama, and a giant mosquito that flies over the audience. As the kids rig the gimmicks, the killer stalks the catwalks, knocking them off one-by-one while circling closer to Maggie, a student whose surreal dreams of a cursed short film called Possessor seem to be linked to murders. Released around the same time as the 80s slasher cycle had run out of steam, Popcorn is an idiosyncratic and uniquely endearing entry in the genre.

Popcorn is scheduled alongside Anguish, another cinema slasher that takes the surrealism of the film-within-a-film concept to the next level.