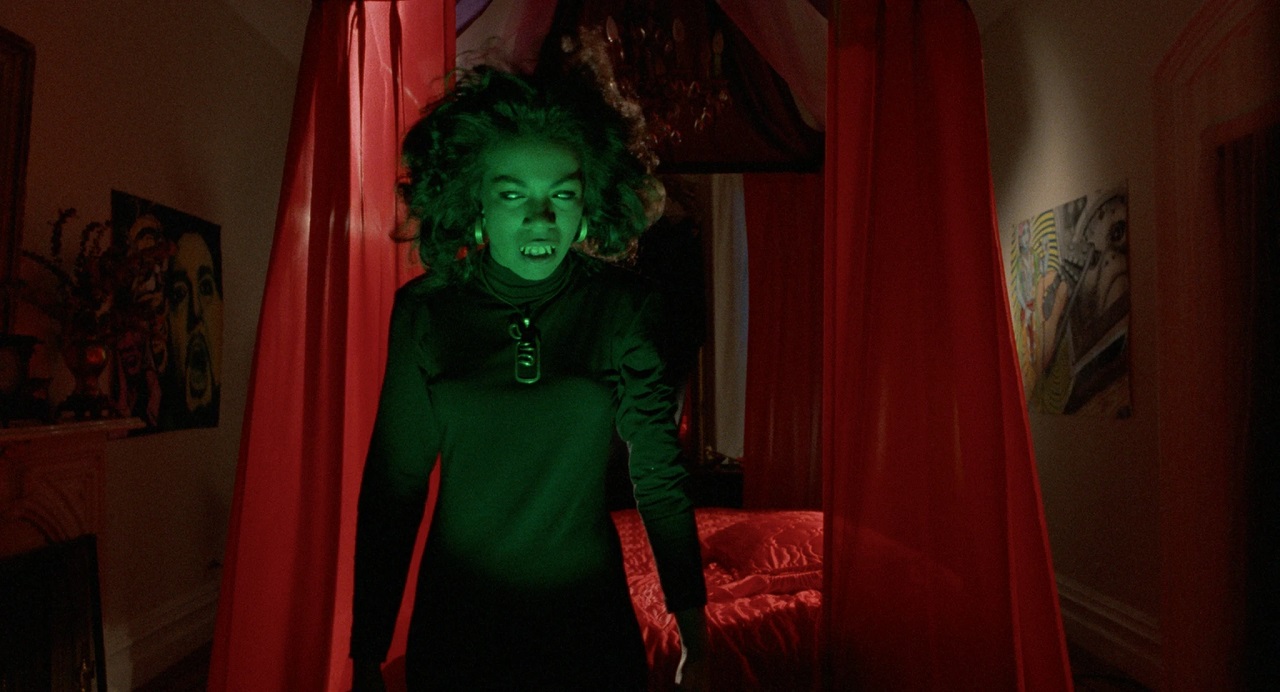 On Halloween weekend Screen Slate took over the Roxy Cinema and presented a series of horror double features. We unfortunately had to postpone Tales From The Crypt: Demon Knight and Def By Temptation, but decided Horror films shouldn’t end just because Halloween is over. So this Friday catch a spooky double feature and Sunday night we’ll be reprising House Of Wax and I Know Who Killed me. While each pair of films is spiritually linked in one way or another, all four are drop-dead bangers shown on the 35-chill-imeter format, except for Def By Temptation, which shows in a new Gore-K restoration at the bequest of its distributor.

Screen Slate members get a discount at the box office and free popcorn.

A succubus haunts the dive bars of Bed-Stuy in this sleeper indie horror banger from one-time director (and star, writer, composer, etc.) James Bond III. Bond and Kadeem Hardison play reunited childhood friends—respectively an aspiring priest and struggling actor—who find themselves wrapped up in a slew of demonic sex murders. Bill Nunn is a detective looking into the mysterious disappearances of the men, who were last seen with a ravishing woman (Cynthia Bond, no relation to the filmmaker). Gory, stylish, funny, and with thoughtful ruminations on friendship and religion that recall Cassavettes and Scorsese, Def By Temptation is increasingly recognized as one of the best indie horror films of the era. And if nothing else, it also has an incredible soundtrack of smooth R&B and New Jack Swing (produced of course by James Bond III).

Def By Temptation is scheduled alongside Demon Knight by the film’s cinematographer Ernest K. Dickerson, who also shot films such as Do the Right Thing, School Daze, and Mo’ Better Blues around the same time with many of the same cast.

In 1995 The Cryptkeeper made the transition to the big screen with this story about Jada Pinkett (pre-Smith) battling satanic hordes in a rundown hotel. Despite the “Tales from the Crypt” framing device, it’s an original story that ranks among the very best horror films of the 90s. Spike Lee cinematographer-turned-director Ernest K. Dickerson, who also shot Def By Temptation, brings a unique style to the proceedings, with a cool, smokey palette splattered in neon green demon blood. And Billy Zane easily out-performs his subsequent role in Titanic as “The Collector,” a charming representative of the forces of evil who tries to seduce Pinkett to the dark side. Sort of a Howard Hawks movie with brain splattering (the special effects are top-notch), Demon Knight is an essential big screen experience.

Demon Knight screens alongside Def By Temptation, which has the unmistakable sheen of Dickerson’s cinematography and a similarly demonic bent.

An in-name-only remake of the 1953 Vincent Price film that in fact owes a massive, unacknowledged debt to Tourist Trap (1979), House of Wax is easily one of the most purely entertaining studio horror films of the 2000s. Elisha Cuthbert leads a cast of twentysomethings-as-teens mostly plucked from The WB shows who end up in a ghost town after their cars break down. They soon discover that the site is in fact a massive wax museum—and the sculptures may not be entirely made of paraffin. Director Jaume Collet-Serra creates a genuinely eerie atmosphere of terror and suspense around R-rated gore, and the gooey set piece at the film’s climax is rife with indelible imagery. But House of Wax is also known as the quintessential film appearance of Paris Hilton, who was then at the peak of her fame. Despite the cringey allusions to her sex tape, she holds her own in one of the more memorable roles of the era.

House of Wax screens alongside I Know Who Killed Me, starring Lindsay Lohan, whose tabloid-fuelled feud with Hilton is an essential part of 2000s lore.

In this torture porn-inflected psychological thriller, Lindsay Lohan plays Aubrey, a multitalented high schooler from a stable home who, after being kidnapped and tortured, loses her memory and returns as Dakota, a teenage stripper who claims to be a different person. Is Dakota really someone else—and if so, who, really? Or is Aubrey going through a PTSD-related dissociative episode? After years as a Disney darling, Lohan had achieved mainstream success with Mean Girls and began to establish serious acting cred in Robert Altman’s A Prairie Home Companion. I Know Who Killed Me was filmed as her well-publicized struggles with substance abuse made her widely considered unemployable, and the movie was a major critical and commercial flop. Despite the glaring flaws and admittedly compelling trainwreck and camp factors, modern audiences have also found it to be a genuinely thrilling example of a film that dares to be stylish, oblique, and extremely weird, like a sleazy update of Italian gialli plopped into the 2007 summer blockbuster season. Screen Slate’s Cosmo Bjorkenheim saw it as a parable for the fractured national consciousness in the wake of Bush administration torture allegations, which makes way more sense than it probably should. In further light of reevaluation of the way young women stars were mistreated and publicly vilified at the time, I Know Who Killed Me is a fascinating lens through which to revisit the 2000s.

I Know Who Killed Me screens alongside House of Wax, starring Paris Hilton, whose tabloid-fuelled feud with Lohan is an essential part of 2000s lore.